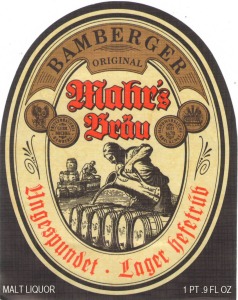 Sunday at Westside Market East Village was insufferably slow. I endured the ignominy of pouring out several ounces of beer that had gone flat in its sample cups. OTOH, Monday was crazy busy, but sane. Unlike some Mondays where customers come just short of exchanging blows as they bull through the aisles, the vibe was relatively chill. On Monday I went with similar pairings both days, partly because I’m stubborn, and in part because I wanted Sunday’s run to get exposure to a bigger crowd.

I continued to celebrate the arrival of Mahr’s lagers to our shelves by sampling them each day. On Sunday, I paired it with a the very nutty French alpine cheese Beaufort. On Monday, I put it with Old Bruges, an aged gouda. In both cases I thought the sweetness of the cheeses would balance the lean, crisp, vegetal flavors of the beers.

I also sampled the Stillwater/Hof Ten Dormaal Arcana, a Belgian Stout, on both days. On Sunday I paired it with Midnight Moon, the aged goat gouda that is very smooth and sweet. On Monday I let it roll with Beaufort. The stout has a dry dark chocolate overtone so I thought the sweet elements would pair well.

The beer that was mostly poured out was Troublesome, the Gose from Off Color in Chicago. Ironically, both days I had to stop the sampling and restock the case with four packs of the beer. People weren’t drinking it but they were buying it. I’d prefer both but if I had to choose…

I've worked in and around the world of high end cheese for 27 years. I've been everything from a department manager who hired and fired and trained staffs to a weekend warrior who shows up ties on an apron the middle of a rush and talks to customers and cleans up the place. I enjoy it all, and I especially like my current situation conducting informal seminars about cheese at area bars and in class at the 92nd St. Y. The current schedule is always up at thejoyofcheese.blogspot.com. In addition I conduct private events that are perfect to lead off birthday parties for foodies and sommeliers and also they make great entertainment for corporate team building events and associates meetings at law firms. In addition, I've been a freelance journalist for 27 years. Currently my profiles of leading musicians and filmmakers appear in the Wall Street Journal and www.theroot.com. I also wrote about sports for the Root, and for five loooong years, which included the entirety of the Isiah Thomas Knicks era, I wrote about the NBA for the New York Sun. I enjoyed writing about basketball so much that I now do it here at rotations for free.
View all posts by jmartin437 →
This entry was posted in beer, cheese, culinary, food, foodie, Fromage of the Day FoD, whiskey, wine. Bookmark the permalink.